Tonight I had a very humbling and eye opening experience. I attended an Anti-Trump protest.

I’ve never attended a protest before. I’ve thought about it lots of times, I cared about causes. I’ve written my pieces on social media. But I’ve never gotten involved, I’ve never thought my voice mattered.

I’m in mourning. Yes, mourning. At first I was in shock, then I was depressed, then I was angry and then I was bargaining to no one for this to be a nightmare. I’ve gone through this cycle a couple times in the past three days. Trying to understand, trying to process, TRYING to accept.

I turn on the news and see people protesting, and I feel the pull. I need to be a part of this. I need to have my voice be heard. But I’m scared. I’m scared that I don’t matter. I’m scared of being attacked and looked down on before of my beliefs, and I’m scared of “the system”. But then I stop. I am a white woman. I am privileged. How do the minorities feel right now? People I love. LGBTQ. Hispanics. African Americans. Muslims. Illegal immigrants. The disabled. I am a woman yes, and my rights are being questioned. Yes I have reason to be afraid. But others have it worse than I do.

So I looked into rallies. I looked for one in Fort Worth, my own streets where I feel safe. I find what I’m looking for, and I work myself up about it all day long.

At 6;30 I get dressed in my favorite shirt that shows the phrase “Feminism is the radial notion that women are people.” I grab a bandana as I’ve been instructed to do in order to cover my face. I take my ID incase the police ask for it, I tell friends where I will be and I set out the door. My husband decides to follow to protect me and document the event.

When I get downtown a fight is breaking out. A man with a confederate battle flag in hand is screaming at the peaceful protesters. He grabs a sign out of someones hand and throws it to the ground. A protester tries to grab his flag in retaliation. He jabs at them with it. The police come over and break it up before it gets out of hand and instructs the man to cross to the other side of the street. This is before I even join my fellow protesters.

I stand quietly at first, unsure of what to do or say. Curtis is with the media, not with the protesters. I am alone. Maybe I made a mistake? My adrenaline tells me that is not the case.

There are many signs being held up. Many saying things about the electoral college. Love trumps hate signs. I’m standing next to two young men holding hands on one side, and an older Hispanic woman on the other side. I walk around the crowd and introduce myself to a few people, without asking they tell me one by one why they are there. “End the racism! End the hate!” the crowd starts chanting as we leave our place on the steps and move into downtown. Some cars honk and show solidarity. Some by standers applaud and hold their arms up in support. Everyone is recording us on their phones. The media is everywhere. Some people are being interviewed. We chant and clap and walk peacefully on the sidewalks, the police guiding us safely the entire time. I’m thankful they are there.

Some people scream at us “FUCK YOU!” or “TRUMPS AMERICA!” It feels like a setback, but we get louder. “LOVE TRUMPS HATE!” I don’t have a sign, so I hold my hand up with a peace sign.

I meet a woman who looks to be my age. She has a little girl in a stroller. I tap her on the shoulder and say thank you. She says “It’s her future. She needs to know that we show love, and that we fought for better.” I hold back tears as we walk past a family with three children, what must all of the children think of us and our opposites? We get back to city hall and there an angry loud man, telling us to go fuck ourselves. That he voted for Trump and we lost and we were whine asses and we needed to get over it. We again chanted “LOVE TRUMPS HATE” to drowned him out.

Before we left, the organizer stood up and gave a beautiful short speech. And We all convinced them to hold another tomorrow.

My husband asked me, “What do you want to come of this?” and to put it simply,
I just want to be heard, and to not feel alone. 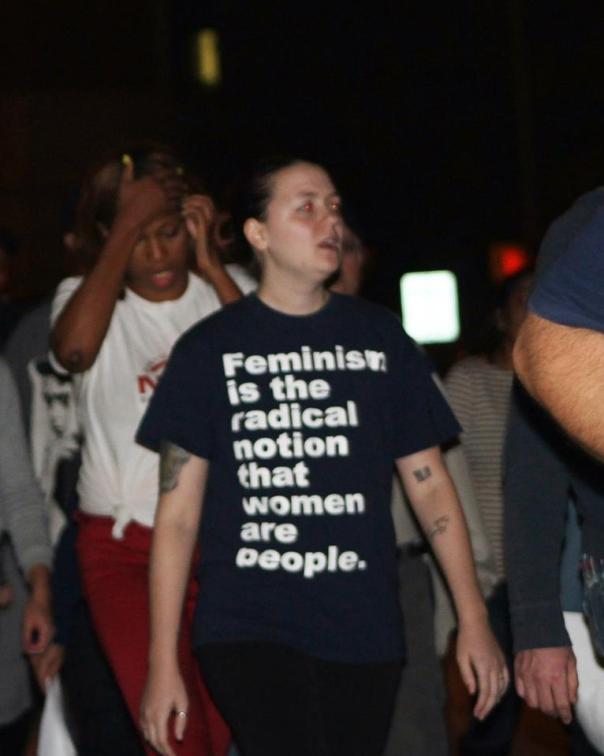